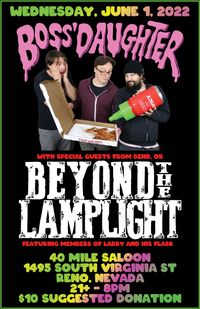 Boss' Daughter and Beyond The Lamplight at 40 Mile Saloon in Reno, NV

Beyond The Lamplight (Bend, OR) Boss' Daughter

Lead singers of Larry and His Flask, Ian Cook and Andrew Carew, continue the fun and songwriting alliance together in their new project Beyond The Lamplight. Soaring harmonies meld with deft lyricism and lightning-fast banjo-picking all against a double-time backbeat to form a quintessential electric barn burner. Boss' Daughter They’re part punk, part horn, part crust, but none of these titles really touch on where they are as a whole. Either way, the pool hall filled to the point that people had to corral themselves in between tables to catch a glimpse of the band’s amazing set. We just want to achieve maximum party time,” said drummer Jamie Locks, while holding a beer with one hand and trying to light Fox’s jeans on fire with the other (Reno News & Review). Boss' Daughter have been know to have a little fun. Hailing from the Biggest Little City in the World, Reno, NV, Boss' Daughter is Chris Fox(Guitar/Vocals), Danny Paul(Bass/Vocals), and Jamie Locks(Drums/Vocals). Check #MaximumPartyTime for more shenanigans.